The First of Many!: 50 Miles at Old Selam

I slept well, considering it was the eve of the race I'd waited years to ride. My first 50!

Still, when my alarm went off at 5:30 Sunday morning, I was already lying awake on my cot inside the horse trailer, listening to distant thunder and Aaruba's growing restlessness as raindrops dappled his blanket and neck. I pulled my riding clothes -- which felt at least as cold as the 34 degree air -- into the warm confines of my sleeping bag and struggled into them. My boots were colder still, but I was far too busy ticking off my pre-ride to-do list to care.
First: Feed Aaruba. He wasn't interested in hay, but that didn't worry me as I'd heard him munching consistently throughout the night. He deigned to consume a couple pounds of Equine Senior before resuming the nervous pacing of his pen.
Second: Feed self. I munched half a bagal with peanut butter while trying unsuccessfully to discourage Aaruba's pacing.
Third: Apply Easyboots. Normally, Travis does this for me, but he was home with the flu. I grabbed a hoof pick, a handful of nylon stockings, and a boot. Slipping two stockings over Aaruba's off hind hoof to help prevent gaiter rubbing, I went to work. 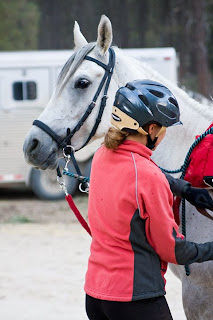 It was a bit like trying to stuff a very squirmy anvil into one of those plastic Easter eggs, but by the time my friend Jennifer arrived at 6:30, I'd progressed to the second hind boot. I panted a greeting and resumed my wresting match with Aaruba's foot. By the time I continued to the more-cooperative front boots, I'd shed four layers of clothing, all the way down to a tank top in the dawn twilight. On the bright side, the rain had stopped.
At 7:00, both ridecamp and Aaruba were wide awake, and I was immensely grateful to have Jennifer handy to mix electrolytes, then hold Aaruba while I finished tacking up for the 7:30 start. She also got out her camera and started snapping. 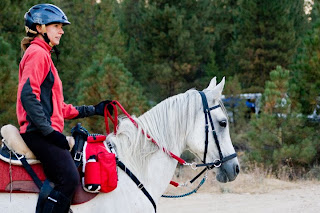 As usual, Aaruba calmed down the moment I swung astride. We checked in with the ride officials, then paced up and down with the other riders, warming up and waiting for the trail to open. Knowing Aaruba's tendency to be competitive, I made sure he and I were headed away from the starting line when 7:30 arrived and most of the horses took off. No racing today -- he'd need that energy later.
We set off once the leaders were well out of sight, but alas, my plan was thwarted by a U-turn at the very beginning of the loop. The moment Aaruba saw the herd ahead, his race brain kicked into high gear and I had a battle on my hands. He snorted fire when I refused to let him trot like a maniac over the rocky terrain, and as a few more riders came up from behind as we circled, he became so agitated that I dismounted and led him almost a mile up the trail before he quieted.
Finally, he settled enough to stand while I tied my jacket behind the saddle and re-mounted. Now quite alone, we tackled the trail at a brisk trot, climbing gradually up the mountain on old logging roads with excellent footing, slowing to conserve energy on the steepest parts. When we reached a long downhill, we let loose a bit to make up some time. An excellent downhill trotter, Aaruba flew along so quickly I feared we'd catch up with the horses ahead, but the only soul we happened upon was the ride photographer. Steve Bradley had set up shop in a meadow bathed in yellow sunlight. He snapped our picture and waved us along with a cheerful, "Have a good ride!" (You can see proofs of his shots on his website; we're number OS82057 and OS82058 on Day 2.) 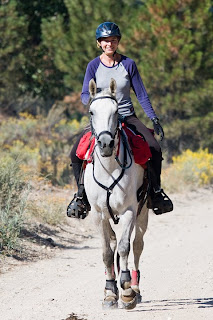 We carried on, alternating walking and trotting, stopping for an occasional mouthful of grass as we climbed up a long hill, then down again to a narrow creek where Aaruba drank deeply.
Just over the creek was the section of trail we'd been warned of at the ride meeting: A couple hundred feet of rather narrow, very steep uphill made slick by the passage of many ATV tires. The sides of the trail offered more crumbly footing, but also tangled shrubs that I feared would catch an Easyboot. I pointed Aaruba up the center of the trail and grabbed mane. He plunged upward in a series of powerful leaps.
Halfway up, he drifted to the right as if to ask, "Are you sure, Mom?" (Or maybe it was, "Lady, are you nuts??") A touch of the rein set him straight, and he motored on, bumping my heels with his stifles as I crouched in two-point to free his back as much as possible. 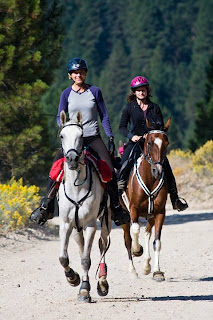 We crested the hill in a surge of adrenaline that powered him along yet another logging road, this one freshly scarred by heavy machinery, then through a long and scenic stretch that I thought must be leading us back toward camp. I estimated we'd averaged 6.5 or 7 mph, and a glance at my watch told me we should finish the 20-mile loop at about 10:30. Sure enough, it was 10:25 when we finally caught up with another rider as she crossed the paved road that told us we were less than half a mile from camp. We rode in together, and Aaruba pulsed down exactly 180 minutes from the start. "Number 510, in at 10:30, out at 11:15!"

We vetted through with all A's except for an A- on gut sounds, which seems to be typical for Aaruba, then headed to the trailer. I removed his bridle and interference boots and left him in his pen with a pan of soaked beet pulp, a flake of alfalfa, and Jennifer (to keep him from rolling with his saddle on) while I ate a banana and mixed another dose of electrolytes. By the time I'd checked Aaruba's pasterns for gaiter rubs -- none! -- and emptied out the sand that had collected in his stockings, it was time to tighten the girth and go.
We were a couple minutes late out of the hold, but no matter. I figured we were already in last place, and besides, we had nothing to prove. All I wanted was to complete the race with a healthy, happy horse. 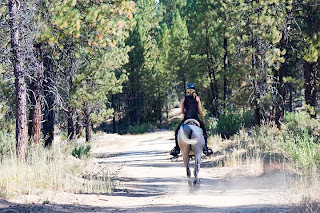 Aaruba loved the early part of the 18-mile loop, a bit of technical singletrack that bounded up and over a series of short, sharp hills as it swooped down to the creek and up again, finally spilling us onto a wide road of decomposed granite that led up, up, up toward the clouds that billowed dark on the jagged horizon.
A chilly wind swept us along the trail and I wondered if I shouldn't have abandoned my jacket at the trailer after all. But as we kept climbing, mostly up and a little down, the exercise of riding kept me warm. About halfway through the loop, Aaruba's energy seemed to flag. No wonder -- we'd already covered more miles than he'd ever done before! Still, I knew were were just over halfway, so I dismounted to run with Aaruba. By taking the lead for a while, I hoped to give him a mental break as much as a physical one.
We'd been on Loop 2 for almost two hours when I heard female voices drifting on the wind. Several more minutes passed before Aaruba and I rounded a bend just in time to glimpse a pair of horses on the trail ahead. Aaruba perked up at once. He clearly had plenty of gas left in the tank, and we caught up with the other riders in short order. They were taking it easy because their horses had completed the Day 1 50 as well, so rode with them only briefly before trotting on ahead. 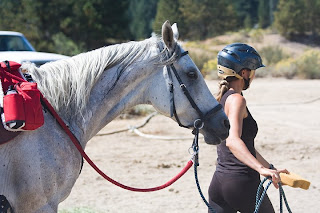 Soon, a sign on a paper plate informed us we were one mile from camp. Only a mile? We were ahead of schedule! Aaruba seemed to sense my excitement. He hustled down the last bit of trail, paused for a long drink at the first water tank he saw, then walked on to the pulse down area. In at 1:43, out at 2:28, and all A's from the vet -- even gut sounds. 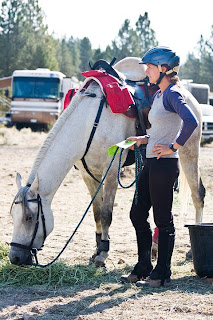 More hay and electrolytes for Aaruba and a plateful of barley salad for me, then it was back on the trail for the final 12 miles. A few horses were finishing the third loop as we started out, and their presence seemed to rekindle Aaruba's enthusiasm. Though we soon found ourselves quite alone again, he plowed along almost as though we were just starting the race. I found myself working to pace him, lest he burn himself out before the end.
Still, we tore through eight miles or so before the day's work seemed to catch up with him. I noticed that although he remained quite sound, he'd grown reluctant to trot downhill -- Tired muscles? Sore shoulders where the points of the saddle tree slid forward against them? -- so I either dismounted to jog down, or held him to a walk while descending slopes. I later discovered that his skin was a little sore from the motion of his saddle pad in the lumber region, a problem both quick to disappear and easy to remedy. 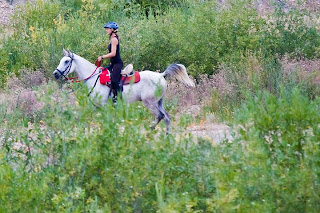 At 4:10, I promised Aaruba we'd be done in half an hour or less. Sure enough, it was 4:28 when we broke out into the rocky wash, crossed the creek once more, and headed for home. Jennifer was waiting with her camera as we approached the finish line, and the ride officials who knew it was our first 50 cheered as we trotted across. I didn't catch our exact finish time, but I think it was about 4:35, giving us a total ride time of 7:35 at an average speed of 6.7 mph. Perfect. 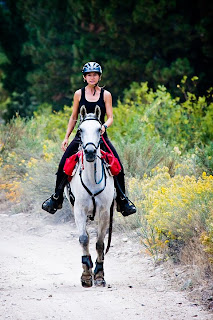 Photos by East End Portrait Photography.
Posted by Tamara Baysinger at 6:01 AM

HOORAY! Good for you guys! Great photos too! Hopefully in the next year or two I will join the club :)

Yay, Tamara! Great story...it sounds like a beautiful ride, and I'm so glad you had such a great experience for your first 50!

Thanks for sharing the story of your ride! It sounds as near to perfect as it is possible to get.

Yeah - congratulations! like you said, The first of many!

Congratulations!
What a fascinating, edge-of-the-seat account of your ride.
I have not heard of the stocking trick. Can you elaborate? It sounds like a great idea.

Well done!
And well-written, too!

Thanks for a nice story--I know how exciting that first 50 is and so great that you and Aaruba had a good experience. Your first 100 will come sooner than you think if you set your mind to it and believe me, it will be the experience of a lifetime! Good luck to you and your beautiful horse! 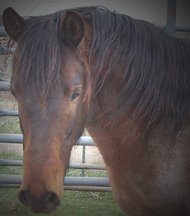 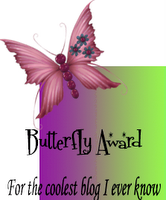 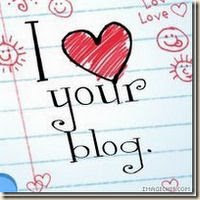